Google reported yesterday that their search engine will now include a website’s speed in the list of factors it uses to decide how high to rank the site in its search results.  In this post I consider what this means for web developers and what steps you can take to make your site faster.

Google has made it clear that speed is not the primary factor when determining page rank:

While site speed is a new signal, it doesn’t carry as much weight as the relevance of a page. Currently, fewer than 1% of search queries are affected by the site speed signal in our implementation and the signal for site speed only applies for visitors searching in English on Google.com at this point.

It is, however, a turning point for web site developers.  What Google is really doing is putting a tangible value on the User Experience.  A fast site makes for a more satisfactory experience, and linking to fast sites also makes users happier with Google.  I know how frustrating it is to see what appears to be a promising search result on Google, only to find the site very sluggish once I click through Google’s recommendation.  So, like it or not, you and I will now have to make sure we at least consider our sites’ rendering speeds.

As I had mentioned in a earlier post, I recently changed the taskforest.aijaz.net website to static HTML from a template-based system.   After reading Google’s blog entry, I installed Firebug on Firefox, as well as two different page performance measuring tools: PageSpeed and YSlow from Yahoo and started testing out the TaskForest web site.  To my dismay, the site scored a paltry 76/100 on PageSpeed and a ‘D’ (67/100) on YSlow.  I’m glad to say that in less than an hour I was able to make the changes that most significantly improved my site’s speed.

There were four major areas in which the two tools recommended changes:

The site was not using the Expires response headers. As this document from Google shows, proper usage of this HTTP header can greatly reduce load on the server as well as clients.The Expires header tells the client how long the server expects the resource to stay unchanged.  For images like logos and screenshots that don’t change very often, this period could (and should) be as high as few months, possibly even the maximum allowed value - one year.  For HTML pages that change often, you could set it to 2-7 days.

The taskforest site which was using Apache 1.41, was not sending the Expires HTTP response header. The reason is that the module that sets this, mod_expires, is not enabled by default.

The website was using three CSS style sheets.  One was my own ‘styles.css,’ but the other two were Yahoos YUI style sheets.  For every request for a web page, there were 3 additional requests for style sheets.

Just like style sheets, There were 6 Javascript files that were being served with every page.

The website was not compressing the data it sent to the client.  As this article and the video below from Google shows, data compression can have a major impact on the size of the payload the server delivers to the client, thus making the site faster.

So the first order of business was to enable mod_expires and install and activate mod_gzip.  These are the Apache modules that enable the Expires header and Response compression.  I reconfigured Apache with the --enable-module=expires and --activate-module=src/modules/gzip/mod_gzip.c options. Previously, the relevant lines in my httpd.conf file looked like this:

After installing the two new modules, my httpd.conf file looked like this:

For the multiple CSS files, I just copied both of the YUI  style sheets into my styles.css file, preserving the copyright comments.  As for the YUI javascript files, it turns out that none of them were being used!  They were just copied and pasted from the taskforestd webserver web site, which does use the javascript files.  I was able to delete them altogether.  It was rather embarrassing to realize that the site was serving unused files.  But I was glad to have the tools that helped me realize this.

The results of the optimization were startling.  The PageTest scores originally looked like this: 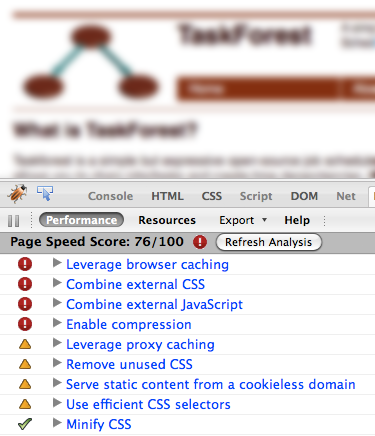 Now, after the optimization, the report was much more respectable: 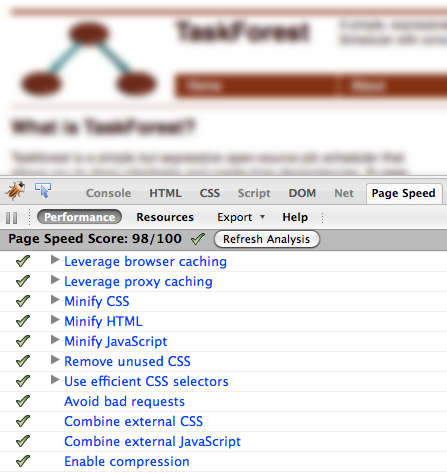 This exercise gave me new insight into what is needed to make a website faster.  It’s not just the fastest machine and the most optimized database that matters.  One also has to consider the fundamental characteristics of the Web, and HTTP in particular, where a little effort can bring significant improvement.