This is the first in a series of blog entries on photography.  Today we look at one of the most critical parts of any camera - the lens.

Have you ever noticed that people can run faster on flat ground than on sand or water?  It’s the same way with light.  Light travels faster in air than in glass.

When light travels through air it moves at roughly the ‘speed of light.’ When light hits a glass surface, it can’t move as fast, and slows down. If the light hits the glass at an angle, something very strange happens. It bends a bit.

Imagine a car driving off an asphalt surface onto a sandy pit at an angle. As shown in Figure 1 below, the right wheel gets onto the sand first, and slows down a little bit.  Meanwhile, the left wheel is still moving at the original speed.  This causes the car to turn slightly towards the right. 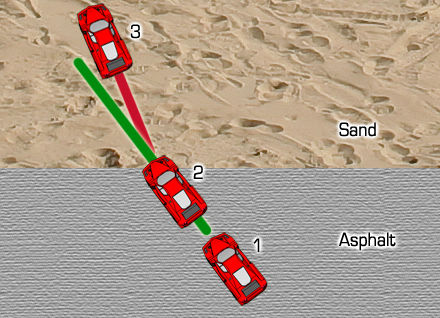 Light behaves the same way - depending on the angle at which it hits the glass, it bends a little bit or a lot when it starts moving in the glass. Similarly, light also bends when it comes out of glass into the air.

Objects reflect rays of light in all directions.  When rays of light reflected off a nearby object hit a convex lens the features of the lens cause the rays of light to converge on the other side of the lens in such a way that the object appears upside down, as in Figure 3.  The image will appear sharp (focused) at a distance that depends on the focal length of the lens and how far away the object is from the lens.  This is essentially how cameras work. They bend the light so that it appears focused on a film or, in the case of digital cameras, a sensor.

Now that we know the basics of how lenses work, we can look at commercial camera lenses and see what f-stops are.

© 2022 Aijaz Ansari
The Joy of Hack by Aijaz Ansari is licensed under a Creative Commons Attribution-ShareAlike 4.0 International License.
Powered by Pelican